Broadcasting 24 hours a day, 7 days a week from Haddington, Scotland

THE GOOD STORY OF THE CONCORDE CRASH 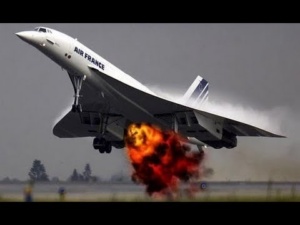 December 9, 2012 LAST WEEK, A FRENCH APPEALS COURT overturned a manslaughter conviction against Continental Airlines for its role in the crash of an Air France Concorde outside Paris twelve years ago. Flight 4590 was a charter destined for New York’s JFK airport on July 25th, 2000, carrying mostly German tourists headed to South America. As it neared takeoff speed, the Concorde struck a thin metal strip on the runway, causing one of its tires to burst. The strip had fallen from the underside of a Continental Airlines DC-10 that had departed minutes earlier, bound for Houston. Chunks of the burst tire impacted the Concorde’s wing at tremendous velocity, resulting in a powerful shock wave within the wing’s fuel tank that ultimately punctured it. Gases from the engines then ignited leaking fuel, touching off a huge ﬁre. The crew wrestled the crippled jet into the air, but lost control moments later, slamming into a hotel.

All 109 passengers and crew perished, as did four people on the ground. All along, conventional wisdom, bolstered by lethargic media coverage, has held that the fuel tank ﬁre was the direct cause of the crash. This from the Associated Press a few days ago, is a typical example of what the public has been reading and hearing: “The burst tire sent bits of rubber ﬂying, puncturing the fuel tanks, which started the ﬁre that brought down the plane.” But this isn’t so. There’s no denying the jet ran over an errant piece of metal that caused a tire explosion and a resultant ﬁre. But while the ﬁre was visually spectacular — caught on camera, it trails behind the plane in a hellish rooster tail — experts say that aside from damaging the number 2 engine, it was very much survivable, and likely would have burned itself out in a matter of a few minutes. Not only was it survivable, but it was probably avoidable as well, had it not been for a chain of errors and oversights that, to date, nobody wants to talk about — particularly not European investigators. The plane went down not because of any ﬁre, directly, but because 1., it was ﬂying too slowly; 2., it was several tons overweight and beyond its aft center of gravity limit; 3., two of its four engines were damaged or erroneously shut down. It was ﬂying too slowly because the pilot at the controls, Christian Marty, had pulled the jet into the air to avoid skidding sideways off the runway and colliding with another plane. Why it was skidding has been the subject of contention, but as we’ll see in a minute, many believe the skid was caused by an improperly repaired landing gear. Under normal circumstances Marty still had enough speed to climb away safely; however, he no longer had enough power. One engine had been badly damaged due to ingestion of foreign material — not only pieces of exploded tire, but debris from a runway edge light the jet had run over during the skid. A second engine, meanwhile, was shut down completely by the cockpit ﬂight engineer — at a time and altitude when he was not supposed to do this, when remaining thrust from that engine was desperately needed for survival. All the while, the plane was an estimated six tons above its maximum allowable weight based on wind conditions at the time of the crash. At proper weight, the jet would have become airborne prior to the point when it ran over the metal strip.
The November 29th verdict was, if nothing else, fair. “France is one of a handful of countries that routinely seek criminal indictments in transportation accidents, regardless of whether there is clear evidence of criminal intent or negligence, “reported the New York Times. All along, aviation safety specialists were highly critical of the suit, believing (as I do), that such prosecutions set a dangerous and destructive precedent, undermining crash investigations and air safety in general. “The aviation safety community is going to view this verdict with great deal of relief,” said William R. Voss, president of the Flight Safety Foundation, speaking in the Times article. “It reminds us that human error, regardless of the tragic outcome, is different from a crime.” Well and good. However, does the full and true story of the disaster remain untold? I point you to a story that ran in the British newspaper The Observer in 2005. It’s seldom that I have ﬂattering things to say about the press’s coverage of aviation accidents, but this particular piece, by reporter David Rose, is a gripping, startling story. A link to the full article is here. In addition, below, is a version that I have edited and condensed for clarity…

Want a request? A 'shoutout'?
Do you know the answer to a competition question?

* UK only, messages are charged at your standard network rate